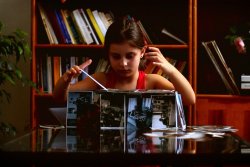 In a family made up of a grandmother, daughter and a 9-year oldg randdaughter, granddaughter is forced to eat. The moral supporter of this little girl who feels contented about her games and within her own world, is a man behind the curtain only visible to her and no one has any clue whether this man is real or imaginary.While the Fried Chicken is a monstrous and aversive thing for the little girl, it turns in to a four - meter -long avand garde object that is pulled over by the (same) man behind the curtain under cheersin an isolated corner (street) populated by the homeless.

Serdar Yilmaz (Izmit, 1973) is an award-winning director. His first featured film project script "3+1 Apartment For Sale" has been selected Cinelink 2013 Development Workshop and Co-Production Market. His short film "Fried Chicken" screened at International Film Festival Rotterdam, Brooklyn Film Festival. His previous short "Stairs" played in over ten international film festivals. Both films form the part of a trilogy based on his first feature film 3+1 Apartment for Sale. Serdar also has credits as art director and production designer on over fifteen features, some of the most successful Turkish new wave films such as Yesim Ustaoglu's Pandora's Box. He won Best Art Director Awards at 2009 and 2007 Golden Boll Film Festival, 2007 Ankara Film Festival. Also an accomplished artist, Serdar has had solo exhibitions and video installations in Turkey and as far away as exhibition at Rio Contemporary Art Museum Brazil. Serdar Yilmaz studied painting at Marmara University Faculty of Fine Arts, Department of Painting in Istanbul, where he also completed his doctorate. He is currently an Associate Professor in the Fine Arts Faculty.