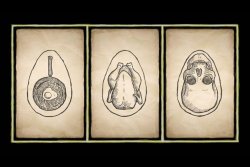 Plural is an experimental digital short film exploring concepts of world-view, subjectivity, and relationships between human perception and nature. Icons from world mythologies are blended with domestic and familiar images and presented within the deliberate frame of the screen.

Since graduating from the University of Waikato with a Bachelor of Arts degree majoring in Screen and Media Studies, Dan Inglis has worked on a variety of film, television and music video projects. Dan's experimental films have been well received at international film festivals in New Zealand, Australia, and the United States.