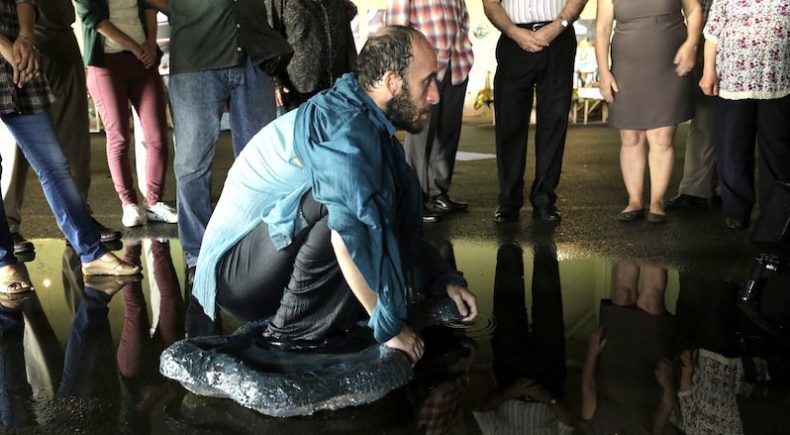 A young man (Mihran Tomasyan) walks in a desolated flea market in a completely head in the clouds mood. He encounters an incarnating object while checking walls covered with old posters with prying eyes and carried away into another reality. What seem to be so strange about him is not only his looks and moves, but also the odd fact that he is leaving a white speckle behind him. The crowds' reaction to this strangeness turns into a common destiny by the sudden start of a pouring rain. As soon as the rain stops, man tries to get away from there, but he immediately awakens to see a new reality; puddles attached to his feet. Having experienced that process on his own, the man meets some other strange characters while carrying the puddles with him.

Serdar Yilmaz (Izmit, 1973) is an award-winning director. His first featured film project script "3+1 Apartment For Sale" has been selected Cinelink 2013 Development Workshop and Co-Production Market. His short film "Fried Chicken" screened at International Film Festival Rotterdam, Brooklyn Film Festival. His previous short "Stairs" played in over ten international film festivals. Both films form the part of a trilogy based on his first feature film 3+1 Apartment for Sale. Serdar also has credits as art director and production designer on over fifteen features, some of the most successful Turkish new wave films such as Yesim Ustaoglu's Pandora's Box. He won Best Art Director Awards at 2009 and 2007 Golden Boll Film Festival, 2007 Ankara Film Festival. Also an accomplished artist, Serdar has had solo exhibitions and video installations in Turkey and as far away as exhibition at Rio Contemporary Art Museum Brazil. Serdar Yilmaz studied painting at Marmara University Faculty of Fine Arts, Department of Painting in Istanbul, where he also completed his doctorate. He is currently an Associate Professor in the Fine Arts Faculty.