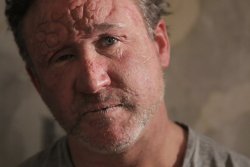 Gamma is a story of urban regeneration in a nuclear irradiated future, following a group of researchers through the ruins of the 70's utopia, moving across a whole city that consists solely of desolation and total abandon.

Born in Jersey, Channel Islands, Jonathan Gales trained in architecture at The Bartlett School of Architecture, UCL. Jonathan's work focuses on the design of space and speculative environments using film and animation techniques. Jonathan's work has won awards including first place at the Architectural 3D Awards 2011 and the Fitzroy Robinson Drawing Prize 2011. Jonathan's work has been exhibited a at the Shanghai Expo 2010, the Royal Academy of Arts London and the Whitechapel Gallery. Jonathan is a founding member of Factory Fifteen, London.