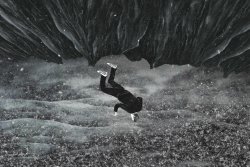 In a barren snowy landscape a man falls to the ground. Searching tocontinue his fall, he discovers other men. He joins them, hoping they willlead him to his destination. What he is led to is incomprehensible.We, The Masses is a short animated film based on the artwork of Robyn O'Neil.The film was conceived of at Werner Herzog's Rogue Film School and funded by the Frameworks scheme with the support of the Irish Film Board, RTE and The Arts Council of Ireland.

Eoghan Kidney was part of the well known Irish animation collective Delicious 9 where he collaborated on over 50 animation projects including music videos, installations, video performances and design. As a solo director, he has directed and produced over 20 music videos and short films. He is represented as a director by Nice & Polite London and recently produced work for Madonna, Modestep, Nicola Roberts, Roxxxan and Lotus F1. We, The Masses is his fourth short film.