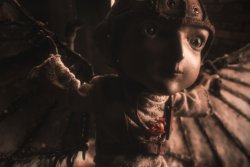 In a city hung between two endless walls, a boy with only pigeons for company, tries to seduce his remote neighbor with wacky inventions.