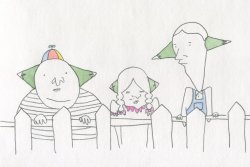 A peaceful Mountaineer with mountains for ears is visited by an absurd and foreboding cast of characters: the Electioneer, the Engineer, the Musketeer, and the Auctioneer.