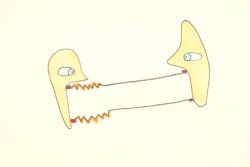 A short, hand-drawn visualization of the mental process of meditation.

Wacky and amusing, yet at times enveloping and intense, the animation illustrates a surge of thought-images, and their inevitable retreat back to a pure and simple circle, a buzzing mantra. The swelling sound effects recorded on cassette and created only by a voice interact with the ever-morphing imagery in a way that guides the viewer through a bizarre experience; it is like watching an extracted slice of the mind displayed onscreen.