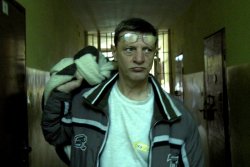 Piotr has a pass to leave prison after fifteen years. Even the simplest activity is a real challenge for him. Lost and bewildered, yet fascinated, he tries to understand today's world. This, however, will turn out to be the least of his problems. On his time out, he will have to deal with his life, re-evaluate the past, consider prospects for the future and choose what is most important to him. How will he use his three days of freedom? The world seen from the perspective of the main protagonist makes us realize how easily people become accustomed to the changing reality.

Lukasz Borowski, graduated in Law, Lodz National Higher School of Film, Television and Theatre and Andrzej Wajda Master School of Film Directing. Worked as an editor and director's assistant on several documentary and feature films. Was a director of photography of "Head down, legs up" - feature film presented on Era New Horizons International Film Festival and Gdynia Polish Film Festival.