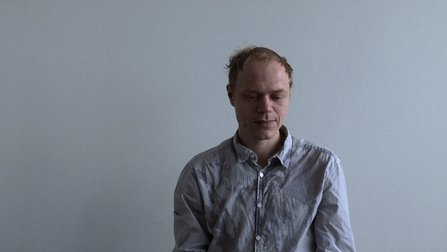 A man delivers a monologue in Danish. Simultaneous English translation is typed on an old, metal typewriter. The man describes the peculiar behavior of his teenage brother, but leaves the audience wondering if he is speaking about himself.

Monique Moumblow was born in Hamilton, Ontario and received a BFA from the Nova Scotia College of Art and Design in 1992. Initially, she was primarily interested in performance and worked collaboratively with Anne Russell. This collaboration eventually led to a video titled "Liabilities". In 1993, Moumblow moved to Montréal where she began to focus on single-channel video and installation. With a dry sense of humour, these videos lead the viewer to consider the separation between voice and written word as well as the construction of narrative. Words which are always imprecise become more so. What often remains is no coherent thought, no absolute or perfect text. Moumblow's work has screened at festivals and galleries in North America and Europe, including the Musée national des beaux-arts du Québec, the Musée d'Art Contemporain du Val-de-Marne, the Festival international du court-metrage (Clermont Ferrand), Impakt (Utrecht), and The International Short Film and Video Festival (Oberhausen). Her videos have been awarded prizes at Cinematexas, The Images Festival (Toronto) and L'immagine Leggera (Palermo) and are included in the collections of the National Gallery of Canada and the Netherlands Media Art Institute. Moumblow has been actively involved with various artist-run centres in Montréal and was co-founder of Sugar Press. She has taught in the Intermedia/Cyberarts department at Concordia University.