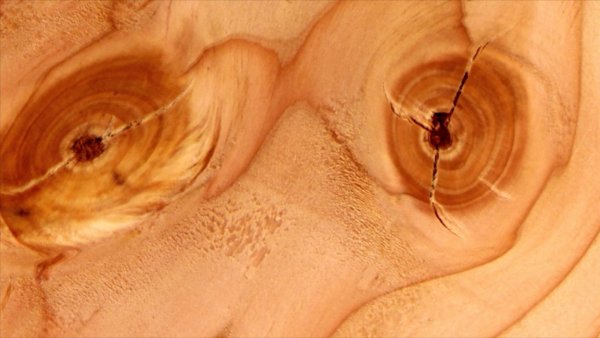 To create this strata-cut animation, a block of wood was planed down one layer at a time and photographed at each pass. The painstaking process revealed a mesmerizing hidden life and motion in the seemingly static grain of the wood, even as the wood itself was reduced to a mound of sawdust.

Keith Skretch is an award-winning theatrical video designer and media artist. A lifelong cinephile, he became interested in the way moving images interact with the dimensional world. He has worked with artists and companies including Big Dance Theater, Palissimo, Jay Scheib, Martin Acosta, The World/Inferno Friendship Society, Tal Yarden, Daniel Fish, Christen Clifford, Jessica Blank, and Mallory Catlett, and his theatrical designs have been seen in New York, Los Angeles, Mexico, and Europe. In 2008 he co-created and performed in Game On, a performance installation built around the card game Set, and in 2012 he debuted Display Replay, an immersive video installation exploring the contemporary sports media spectacle of professional football. He holds an AB from the University of Chicago and was one of the first ever graduates of the Video for Performance MFA specialization at the California Institute of the Arts.