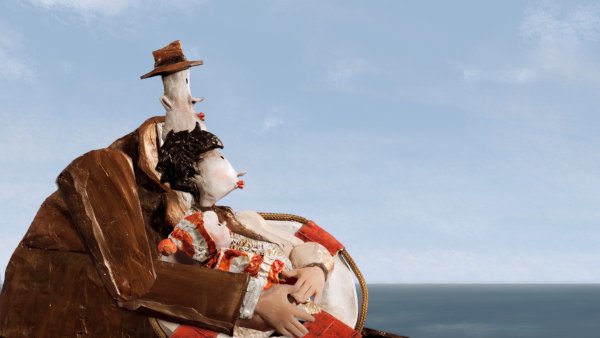 A story about the eternal human search for home - Hollow Land begins, as all such searches must, with the dream of utopia. Solomon and Berta are two seekers who arrive - their treasured bathtub improbably in tow - in a land that promises respite from their many journeys. From the first optimistic moments after their arrival, to the film's final haunting scene at sea, Hollow Land captures the state of being displaced - whether by circumstance or by choice.

are independent filmmakers and immigrants. Originally from Israel, they have been living away from their "homeland" for many years, making films in different countries, searching for their "utopia" in film and in reality... Their films won more than thirty international prizes and participated in numerous film festivals. They have given master classes all around the world and had retrospective screenings including at the Forum des images in Paris 2009. Over the past eight years they have been working at the "Animation Workshop" in Viborg, Denmark, where they also teach and guide the bachelor projects of the school. 'Hollow Land' is their 4th professional film.