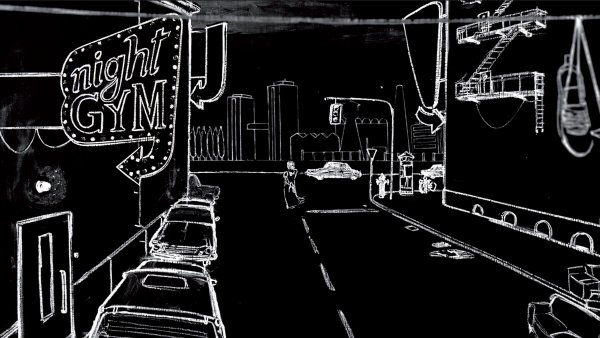 MY NAME IS BOFFER BINGS

The film is based on the well-known short story 'Oil of Dog'. The rough and simple chalk animation technique is match for the absurd and surrealistic style of the story. The line-drawing character representation over a black background is flavour of film noir. This is the story of Boffer Bings, who lives in a village where his father manages a prospering business producing dog-oil. Boffer Bings not only assists his father in procuring dogs for distill, but also helps to carry away the debris of his mother's studio, where she disposes of unwelcome babies. Martin is accomplished in his jobs, until his accidental invention steers the family business into an economic boom. Tragedy is inevitable.Everything happens in real time in front of the camera - a specialty of chalk animation. Since the visual world of the film is so stylistic, it is important to find the best voiceovers in order to build up the characters. The unity of picture and sound help the audience to empathize with the story. Sound can depict those meanings that are not visible because of the chalk technique. In this respect, sound design in this film is a visual composer tool.

László Csáki is an award winning director, a visual artist and teacher at Moholy-Nagy University of Art and Design. He is an interdisciplinary artist who feels equally comfortable creating live action film as creating mixed technique animation. He worked in almost every genre of motion picture. He is exceptionally visionary director, but he never lets visuals dominate over stories, on the contrary he always lets the story choose the right technique for the execution. But no matter what kind of project he is working on or what kind of technology he uses, he always works with passion, perfectionalism and discipline to create something extraordinary and unique. His latest project My Name is Boffer Bings took four years to complete and was hand drawn personally by him.