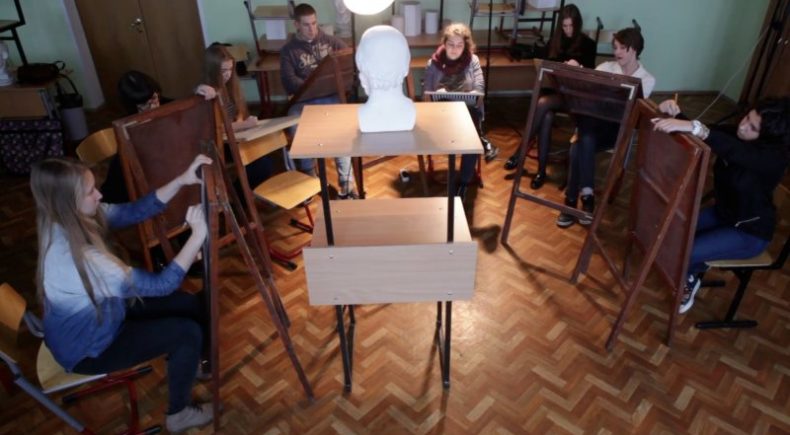 They've grown up, and ready to enter into a new world. Here are the snippets of thoughts of teens woven into the common stream. Scraps of days spent together and apart, days full of anticipation of the main event in their lives - exam to get in Architectural Institute. The rest of life goes in parallel - old people get older, dancers dance, party-goers party hard. Everyone has their own problems, everyone has reason to cry, to choke on grief, bite elbows. And the line looms in a way ahead. The line which they have to cross. And crossing, open in a burst of sincerity what is really important at this point - their ability to see and draw. They are 16. They draw Socrates, sitting opposite the window, the world outside is changing.

Anna SarukhanovaWas born on 16.12.1988 in Tbilisi, Georgia. She graduated from Moscow State University, faculty of journalism, from the Higher Courses for Scriptwriters and Film Directors. Her short film "Away" won the best debut prize at the International Film Festival "Kinoproba" (Russia). The film was screened at the Moscow Internation Film Festival, main competition, Tallinn Black Nights Film Festival, International Film Festival in Tbilisi (Georgia), Greece, Korea, Dubai (UAE), Brazil, Hungary and others. Anna's next short film (with in cooperation with Katalina Balradze) "Onetwothree" was selected for the Gesamt film festival in Copenhagen (the competition was announced and took place under the supervision of Lars von Trier). She also shooted several music videos and short film "Elephant Playground". Anna was a first assistant director on the feature film "Yes and Yes" directed by Valeria Gai Germanica.