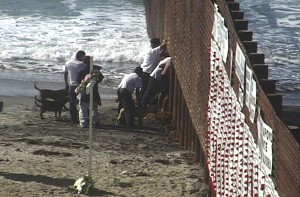 DEATH ON A FRIENDLY BORDER

since the mid-1990s when the United States began militarizing its southern border, an average of one person a day has died crossing inot the USA. "Death on a Friendly Border" puts a human face on this international tragedy. We hear the story of one woman's journey from her impoverished village in Mexico into the US desert with her 18 month old baby. And we hear the stories of migrants, the Border Patrol agents and the activists for whom the militarization of the border has become the governing reality of their lives.

Rachel Antell received an MTS from Harvard Divinity School and a MA in Documentary Film and Video from Stanford University. Her production experience includes two educational CD-ROMs well as several other short films. She currently works as a documentary producer and editor in the Bay Area.