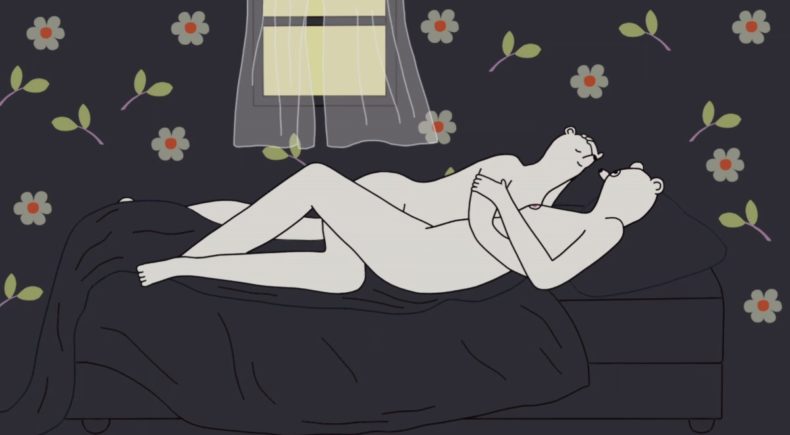 First love is an intoxicating experience, but with it can come excruciating awkwardness, unrequited emotions, and confusing issues of identity. In her trademark playful style, Quebec cartoonist and animator Diane Obomsawin, a.k.a. Obom, adapts her latest graphic novel for the screen, using endearing anthropomorphic figures to tell poignant real-life stories of love. Charlotte, Mathilde, Marie, and Diane reveal the nitty-gritty about their first loves, sharing funny and intimate tales of one-sided infatuation, mutual attraction, erotic moments, and fumbling attempts at sexual expression. For them, sexual awakening comes hand-in-hand with discovering their desire for other women-and a joyful new self-awareness. Obom's visually whimsical stories deftly weave together these youthful memories, resulting in a powerful and tender work with universal appeal. Evoking all the raw intensity and heart-pounding excitement of falling in love for the very first time, this uplifting film will resonate with lovers everywhere

Diane Obomsawin is a cartoonist and animator of Abenaki descent who calls Montreal home. Born in 1959, she grew up mainly in France, where she began her career as a graphic artist. She returned to Montreal in the early 1980s and made the natural leap to comic books, illustration and painting. For the next two decades, she would be a mainstay of Quebec's underground comic book scene, during which time she became better known under the pseudonym "Obom." In 1992, she created her first animated short, L'abominable microbe, launching a long and wild adventure in filmmaking. Obom's first comic book, Plus tard, was published in 1997 by L'Oie de Cravan, a small Montreal publisher specializing in works of poetry. During this time, she also directed a number of films commissioned by the NFB: The Worm (2000), The Coat (2000) and Elbow Room (2002) proved her to be a gifted storyteller and honed her unique perspective on the world. In more recent years, Obom has focused heavily on her own personal projects. In 2007, she made Here and There, her first auteur film for the NFB. It was nominated for Genie and Jutra awards and won Best Narrative Short Animation at the Ottawa International Animation Festival. Later that same year, Obom created Kaspar, a moving and poetic comic book about the documented story of "Europe's child" Kaspar Hauser, who was allegedly raised in a dark cellar. The book won the Grand Prix de la ville de Québec and the Best French Book prize at Montreal's Expozine in 2008. Shortly after, Montreal's Festival international du film sur l'art honoured her work with a tribute award, while 2010 saw the release of Obom's Pink Mimi Drink, a comic book collection of dreams. In 2012, the NFB produced the animated adaptation of Kaspar, which was nominated for a Jutra Award in 2013 and awarded a Silver Pegasus at the Animator Festival in Poznan, Poland. In 2014, L'Oie de Cravan published her comic book J'aime les filles. This first printing was quickly followed by an English version by publishing house Drawn & Quarterly. The long-awaited film adaptation of this original work marks the eighth collaboration between this influential filmmaker and the NFB. Throughout her prolific career, Obom has participated in numerous shows, installations and performances. She has also frequently lent her illustration talents to the Montreal daily newspapers Le Devoir and La Presse, and contributed to the best years of humour magazines such as Croc and Anormal, along with Clin d'œil, Châtelaine, Le temps fou and La vie en rose. More recently, she was interviewed on BD QC, a French-language show on ICI ARTV dedicated to Quebec's comic book scene. A master of storytelling and framing, Obom has made a name for herself worldwide with her uniquely naïve, minimalist style and her distinctive creations: human characters with animal heads. Ever striving for simplicity, this multidisciplinary artist depicts humanity in a profoundly perceptive and earnest way that is both captivating and bewitching.