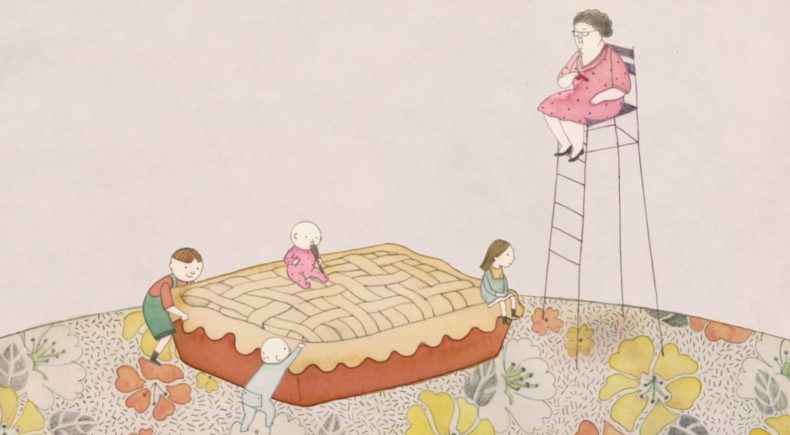 Mamie lives in Gaspésie in a house that faces away from the sea. Her granddaughter wonders: "Why isn't Mamie interested in me or her other grandchildren? Why won't she give me any affection or her beautiful blanket? What happened that made Mamie so indifferent?" Just like her home, Mamie shuts herself off and won't let anyone into heart. If it's true that we are the summary of our experiences and those we allow into our lives, what remains if we don't let anyone in? In this wonderful animation of hand-painted watercolours, the filmmaker reaches back into her own childhood memories to share a personal and touching story about the break in "passing things on" between her and her grandmother. Mamie was directed by Janice Nadeau and co-produced by the NFB and Folimage.

Janice Nadeau studied graphic design at the Université du Québec à Montréal and illustration at the École supérieure des arts décoratifs de Strasbourg (France) before working as an art director for various organizations. Over the years, she has illustrated a number of books and is a three-time recipient of the Governor General's Award for Illustration. Nul poisson où aller, published in 2003 based on a text by Marie-Francine Hébert, earned her the first of these three awards. Nadeau later adapted the book for No Fish Where to Go, her first animated film co-directed by Nicola Lemay and produced by the National Film Board of Canada. The film was widely shown at festivals and won several awards, including the International Educational Program Contest Japan Prize in Tokyo and the Fipresci Award at the Annecy International Animated Film Festival. Mamie, Nadeau's solo directorial debut, is a personal and intimate story co-produced by the NFB and Folimage. Nadeau's transition to film has in no way altered her evocative, poetic and sophisticated style, which blends both retro and modern aesthetics. Her fine and intricate line work can be seen through her soft watercolours, whose multitude of details bring a rich touch to her compositions. Nadeau also teaches illustration at the École de design of Université du Québec à Montréal.