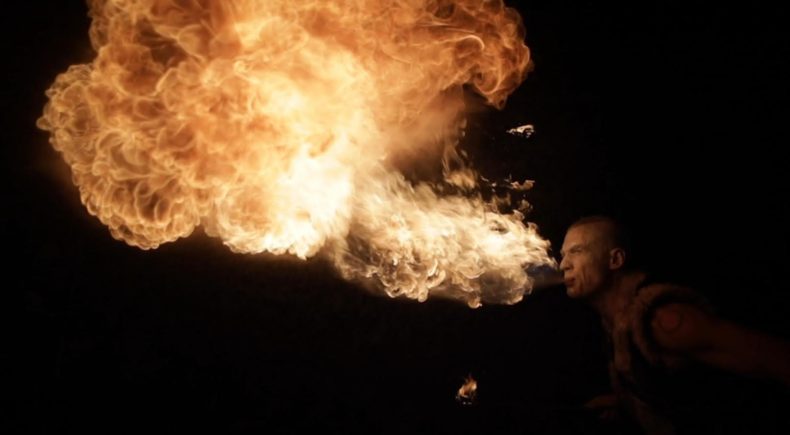 Eight unique and accomplished professional performers from the Bushwick Brooklyn circus arts collaborative called "House of Yes" perform for the camera in this stylized dance film. They speak to the audience not just through movement, but in their own voices, via woven-together audio interviews, reflecting on their relationship to their art and what moves them to perform. These artists have dedicated their lives to the premise of "Radical Self Expression," one of the ten principles of Burning Man culture. Featuring fire-spinning, fire-breathing, hooping, aerial silks, lyra, trapeze and cross-disciplinary dance, we connect with each dancer in their own emotional, raw and vulnerable words as we are awed with their feats of seemingly effortless grace. By letting their own light shine, these artists inspire others to do the same.

Jendra Jarnagin is an accomplished, award-winning Director of Photography, with over 25 years experience and dozens of credits in feature films, episodic television, web series, commercials, music videos, documentaries and virtual reality. Canon approached her to shoot her own film as a showpiece for the release of their new 5D Mark iv camera, and she conceived the inspirational, experimental dance film Live Your Light, which she directed, produced and shot. Other credits as Director/DP include short-form documentaries such as a fundraising video for Mark Ruffalo for his non-profit organization, Water Defense. She was also a "Unit Director" and DP for segments of the international feature length documentary Women Behind the Camera. And she directed and shot a re-make/spoof of Michael Jackson's "Smooth Criminal" music video for the underground fan film King of Pop Killer. As Producer, she co-produced and shot the short film Into the Rose Garden, for actor Chase Coleman, and was credited as Associate Producer on the multi award winning feature film TRI, for which she was Director of Photography. Live Your Light is her first short film as Director, since graduating NYU film school over 20 years ago.

I work professionally as a Director of Photography because I have always been drawn to the visual. Expressing myself visually is such an intrinsic part of who I am that I usually don’t give it much thought. The process of making this film has shed a lot of light for me on why I am a filmmaker, and the importance of creative expression. Canon approached me with an opportunity to make my own film with very short notice, for the release of their new 5D Mark iv camera. Since I didn’t aspire to be a Director, I didn’t have a script or concept ready to go. So in pulling something together out of thin air, I didn’t really have time to think about it. I immediately went with what I knew most appealed to me visually: performers from my local NYC Burning Man arts community. Ironically this shoot came about during the week while Burning Man was actually happening, and many of the people who I would have loved to be involved were unreachable in the desert… Luckily, since the venue House of Yes has been established as a permanent Brooklyn fixture, I at least had them as a home base of the “burner” performance community to call upon. The collaborative essence of this concept was a great fit for the collaborative ethos that is House of Yes. The rushed nature of this production brought out a magic authenticity to the entire process. We didn’t have time to second guess ourselves, or debate or discuss. We just had to keep moving forward and making decisions so quickly, that we were just going with our gut the whole time. As I thought about honing in on a concept that wasn’t just “eye-candy,” since I didn’t want to fall into the trap of presenting “style without substance,” it became clear to me that it was really about the people. What inspired me was the amazing, courageous, beautiful people that let their own light shine. I wanted to share their light by exposing their art to viewers beyond our community. Also, I didn’t want to just see them, I wanted to hear from them in their own voices, because they were all so unique and interesting! I knew I didn’t want to make a documentary but a visual art film: to create a reflection on the theme of “Radical Self Expression.” Unconsciously, I ended up creating a piece that brought together all the parts of myself. The theme was the same as my favorite quote. The performers were saying things in their interviews that were nearly verbatim quotes from a mission statement I had written for myself. For the first time, I completely integrated the two sides of myself that were important to me: my professional life and the community of my burner social life. Through making a film about self-expression, I became fully self-expressed: as a filmmaker, an artist, a cinematographer, a collaborator, a burner and as a human.