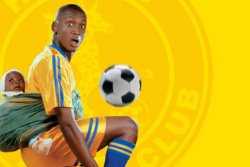 Sex, Soccer and Life's Little secrets... Tiyane is in danger of becoming the local hero - at 17! Rising star in Hyenas; the township football team, responsible son and high school Prefect hopeful, Tiyane can't seem to put a foot wrong. But the game of life is about to stage a grand upset. His hormones are running riot and everybody wants a piece of him, especially Linda, a long-time neighborhood friend. Tiyane's game, but there are some things he hadn't bargained for. Like falling in love with the lovely Juliet, or becoming a Dad. As he tries to weave his way though the chaos of lust, love and self-deceiving, Tiyane finally has to face up to the fact that he has a son. A fast-paced, funny and touching story of teenage love, lust for life and passion for football.

Born and raised in India, John Riber completed university film studies in the United States in 1977. He spent ten years making films in Bangladesh and India. In 1987 he moved to Zimbabwe where he and his wife, Louise, established Media for Development Trust, one of Africa's leading production and distribution houses. He has worked as a film lab technician, cameraman, editor, scriptwriter, and as producer of the award winning African feature films Neria, More Time, and Everyone's Child. Yellow Card marks his debut as a director.