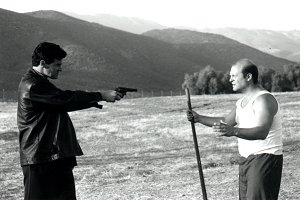 A hit man takes his victim to the middle of the desert to make the victim dig his own grave. But when the victim finds out this is the hit man's first time killing a guy, the tables are slowly turned. Will the hit man let him go? Will he kill the victim? Or will the victim completely turn the tables?

Award winning filmmaker Tom Hodges has been selected by Filmmaker Magazine as one of their "25 New Faces of Indie." Tom has spent the past thirteen years working as an actor, but found working on the other side of the camera his most exciting challenge to date. His short film, "Shoot the Moon," which he wrote, produced and directed, has won seven awards including the Audience Award for Best Short at the Hamptons International Film Festival, and Audience Award for Best Comedy at the Palm Springs International Shorts Festival.