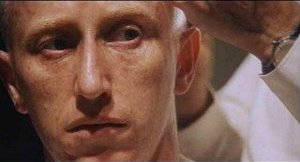 An old fashioned barber finds himself at a loss when called upon to shave an unusually jittery customer. When all attempts at idle everyday chatter fail to calm the man, the barber desperately falls back on his last resort - to tell the only real secret he knows...

A native of Lugano, Switzerland, Lorenzo Benedick moved to the U.S. and graduated from Emerson College in 1993. He worked as a production assistant, video-operator, and assistant director on several films and commercials. He is now producing and directing music videos and commercials through his production company, Vagabond Films.