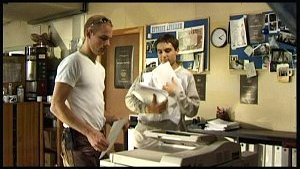 Christian Tafdrup is the script copier at Zentropa. He is the company's absolute dog's body and the other employees treat him like dirt. But his friends are fascinated by the fact that he works at Zentropa; it means that he really is 'in the movie business' and must surely know Lars von Trier himself. Christian dreams of becoming a film director, but sadly he is totally devoid of talent. He has no ideas for films, and his attempt at scriptwriting is a disaster. On yet another evening of working late he happens to see a videotape of a casting session. He has a brainwave. He pins ads up all over town seeking women for a new Danish feature film. Late at night he sets up screen tests in Zentropa's basement. Things begin really well. More and more hopeful actresses turn up to his casting sessions in the basement and Christian begins to feel like the flashy director of his dreams. But after he's auditioned several hundred girls the problems begin to pile up. All these girls just don't understand why they haven't heard the results of their screen tests. They get onto him-they're friendly at first, but as time goes by they grow more and more impatient, and in their fury they finally begin turning up at Zentropa in the day time. Christian only just manages to avoid exposure. When Christian's conscience begins pricking him about a really cute girl he has screen-tested and who desperately wants the part, he decides to tell her the truth. But just as he is about to do so they are interrupted by a horde of frightening females who start chasing him around Zentropa's basement. In the nick of time the cute girl rescues him from the clutches of the howling mob and he flees home in terror. Gradually he calms down, and as he wipes the sweat off his face he has a brainwave

Christian Tafdrup made his film debut as the lead in Zentropa's first film production (Pretty Boy, 1993, directed by Carsten Sønder). After that he was employed by Zentropa to make photocopies and empty wastepaper bins until 1997, when production of The Copier began. Christian Tafdrup is currently enrolled at the State Theatre School, Copenhagen.