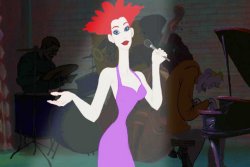 THE SHADOW OF DOUBT

A singer returns to the Paris club where she got her break years before. While preparing to go on stage she thinks about Jake, the club owner, who still has not returned to the stage where he was once a great performer. This feeds her own insecurities which pull her through her dressing room mirror into a world where an angry ghost attempts to set her up against Jake. She rejects this temptation, realizing that what haunts her helps her sing the blues.

Cynthia recently completed directing, "The Shadow of Doubt". The first woman to be nominated for an "Annie Award" for outstanding animation and outstanding short film for, "Interview with Talullah, Queen of the Universe". Wells also directs prime time television, animation for Academy Award nominated documentaries, and has been supervising animator on features and Emmy award winning shows.