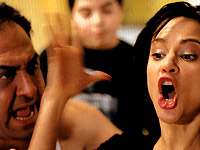 Serbandi, a middle-aged man with a Middle Eastern background, is in turmoil. He has lost control of the women in his home. They are mean and show no respect. They ignore him, and his attempts to live up to his patriarchal duties lead only to absurd situations. Serbandi's life is totally out of kilter from the day his oldest daughter Minoo arrives from the USA to attend her younger sister's wedding. Minoo is an independent, strong and destructive young woman who enjoys provocation and testing limits in her search for her own life. Serbandi loves her and wants to save her. He wants to control the uncontrollable and tame her wild nature at any cost. But he sets himself an impossible task. This is a story about a family in chaos, a lively and eventful film filled with humor and a sense of foreboding.

Susan Taslimi started her film career in 1980. She worked closely with one of Iran's legendary directors - Bahram Bezai. Her portrayals of women and open protests against the political and cultural atmosphere after the Islamic revolution created a threatening situation, which forced her to leave Iran. In 1987, at the height of her film career, she escaped to Sweden. Just over three years later she was back on the stage acting in Swedish. She also played the lead in Reza Parsa's exam film, "The Border," which won an Oscar. "All Hell Let Loose" is her debut as a film director.