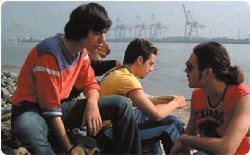 Four young men from southern Italy, dreaming of an easy way to get rich, reach distant Norway full of hope. Making enough money is the first issue. Despite some vague efforts not one of them has a trade or craft and none has ever supported himself. A series of tragic and grotesque events will make them grow and take on their first responsibilities.

Carlo was born in 1967 in Naples, Italy. After Graduating in Fine Arts at Bologna University, he took a screenwriter workshop with Ugo Pirro in 1994 and worked as an assistant director for Diego Olivares. Carlo directed many short films and documentaries. This is his first feature film.