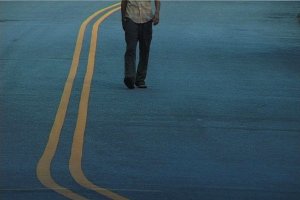 Kagami is a film about a man who is stuck in the corporate ratrace of living and working in New York City in this day and age. He blindly follows a routine of work by day and television by night, while his soul is being drained. Having lived this life for years, he finds himself waking up to the realization that he has become nothing more than disillusioned and tired. Instead of succumbing to his depression or escapism, he chooses another way. By questioning and letting go of the things that stand between him and his inner peace he tries to regain some meaning to life. Physically looking for serenity, he sets out on a soulsearch, looking for peace and quiet in a world from which he has gradually become alienated.

Benjamin Landshoff Born July 31st 1968, Amsterdam, The Netherlands. Apart from a few workshops, Mr Landshoff has not received any formal film or video education. He started out directing various items for Dutch television shows in 1992. In the following years he was asked to direct a number of television commercials and in 1997 wrote and directed an award winning tv-show titled 'Erwassus', which he repeated for the 1998 season. The show has been in reruns eversince.