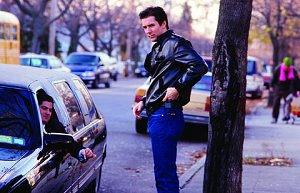 Brooklyn neighborhood knuckleheads forget that it's leap year when they are hired to knock off a deli/front on the last day of February for a million cash.

After studying acting with the late Geraldine Page, Harry O'Reilly has been acting for film and television since 1986. He has appeared in films such as Hamburger Hill, Reality Bites, The Cable Guy, One True Thing, Pants on Fire, and most recently The Opponent. Television credits include series regular roles in the award winning Homefront, Hotel Malibu (with Jennifer Lopez), and The Ben Stiller Comedy Show. Crooked Lines is Harry's feature debut. He directed the film shorts (where he insists he showed flashes of brilliance) Flowers for Lilly and The Drop. His upcoming feature, St. Anthony's Bones, written by Colin Quinn, is currently in development with Presto Films.