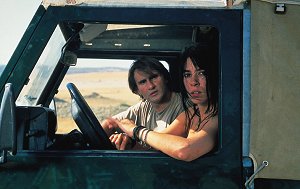 A road movie dealing with the lives of two Greek Cypriots whose lives have been torn apart by the Turkish invasion of the island in 1974. After a period of intense fighting, the UN intervenes and draws a Green Line through the middle of Cyprus, separating the Turkish and Greek territories. Twenty-six years later, Lukas lives a hermit's life in the divided city of Nicosia, haunted by memories of the past. Like Lukas, Phoebe is a child of the war, but unlike him she refuses to dwell on painful memories. Instead, she lives for the present, working as a smuggler, trading goods with Greeks and Turks on both sides of the border. Tempted by an offer of cash, Phoebe reluctantly agrees to escort Lukas back to his family village on the Turkish occupied side of the island. Along the way, this odd couple fights, argues and confronts their personal demons. Ultimately, they will find a way to move forward into the future.

Born in London, in 1966, to Greek Cypriot parents, he grew up in Cyprus. He holds a BA from the University of Warwick and a Master's in film directing from Leeds Metropolitan University. He went on to study direction at the Polish National Film School in Lodz. His short films were selected for broadcast by Channel Four in Britain and won awards at various international film festivals. Under the Stars is his first feature film.