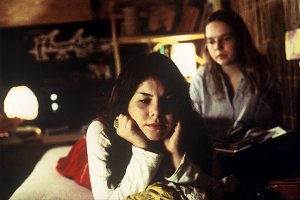 Johanna, a chubby 17-year-old teenager, dreams of studying fashion design in Paris. For years Johanna has been making her own, very off-beat clothes and now she doesn´t want to finish school anymore. While looking for a sponsor for her design career, she finds out who her real father is. A Turk who has been living for years with his family in Cologne, where he runs an elegant Turkish restaurant. Instead of facing her new situation and her feelings Johanna pursues her original plan to allocate the money for her studying. Without telling her father the truth she starts working as a kitchen help at his restaurant and unfortunately runs into a catastrophe...

Sülbiye V. Günar was born in 1973 as the daughter of German and Turkish parents in Stuttgart, where she also grew up. Since 1995, she has been studying at the Film and Television Academy in Berlin, majoring in directing and screenwriting. Since 1994, she has gained diverse professional experience in the areas of editing, direction, casting and script continuity. Sülbiye lives in Berlin and London.