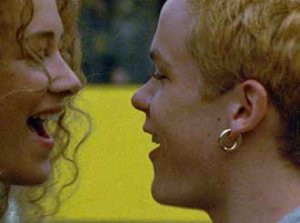 15-year-old Paule leads a wild life on the streets of Berlin. Together with Arnel, 12, who dreams of returning to his home in Bosnia, he shoplifts in department stores and mugs passersby in expensive shopping streets. Everything changes when Paule robs 18-year-old Julia and falls in love with her. He follows her and gives her back the things he stole from her, pretending to be older than he really is. The girl, who has enjoyed a sheltered upbringing, soon feels equally attracted to Paule, his cheeky charm, and the exciting world he inhabits. But when Arnel is tortured by his cousin's gang and severely injured, she realizes how dangerous and alien that world is. Paule, too, is drawn ever deeper into the conflict between his old life and the life he dreams of. Paule puts up a struggle, but in the end this conflict leads him into a catastrophe with fatal consequences...

Torsten Löhn was born in Berlin in 1964. After completing studies in art history, Japanese Studies, and Film Sciences, he studied directing at the Deutsche Film- und Fernsehakademie Berlin (German Film and Television Academy Berlin), with a major in screenwriting. From 1994 to 1999, he worked as production manager and soundman for various productions, as well as teaching courses in film sound. "PAULE UND JULIA" is his first full-length feature film.