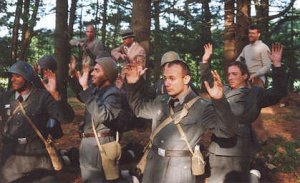 LETTERS FROM THE DEAD

Northern Italy late 1944. A German Army lieutenant desperately waits for Italian reinforcements. The Italian reinforcements finally arrive, but to everyone's dismay, they are in worse shape than the German army they are supposed to support. Cooperation between the German and Italian Officer breaks down and the men start to fight amongst themselves. Weary from Allied bombardment and Italian partisans attacking from the woods, the German and Italian Lieutenants have to find a way to work things out, before the enemy does it for them. Filmed on a very low budget with European actors flown in to the United States and sleeping on cots in Brooklyn, this is perhaps the lowest budget war film ever made. First time director Ari Taub brings you a different kind of war film, where there are no heroes and the enemy is from within.

Ari Taub graduated from NYU film School in 1987. His short films have been showcased around the world. Among the awards that he has won: the Nissan Focus Award, the Warner Award, the Mobil Award, several Cine Golden Eagles, as well as 1st Prize at the Certamen International Film Festival in Spain, and 1st Prize at the Klagenfurt International film festival in Austria. His films have been showcased on Showtime, Arts & Entertainment, HBO, and the Disney Channel. His film "The Red Herring" was compared to Roger Corman's "Little Shop of Horrors" on Showtime's the Director's Series for excellence in low-budget filmmaking. He has been interviewed by Roger Ebert of Siskel & Ebert on the Disney Channel and has appeared in articles in the Los Angeles Times as one of the most promising young filmmakers to come out of NYU Film school.