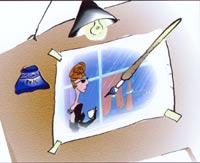 Mona tells us about her search for love in New York City.

Michael Sporn has been animating professionally since 1972. He formed his own company in 1980. One of his first films, DOCTOR DESOTO was nominated for an Oscar. His studio has been producing films for television and Home Video. Better known titles include: THE RED SHOES, ABEL'S ISLAND (Emmy Nominee), THE DANCING FROG (CableACE Award Winner), LYLE LYLE CROCODILE, WHITEWASH (EMMY and CableACE Nominee), IRA SLEEPS OVER (CableACE Award Winner).