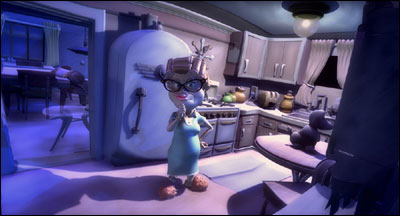 An aging widow, through a scotch-induced haze, has become convinced that bandleader Guy Lombardo and his Royal Canadians have taken up residence in her house. She hears them playing, but she's never actually seen them as the performance is always happening in another room.

Tim Miller is Creative Director and co-founder of Blur Studio. Paul Taylor is an animation director and visual effects supervisor with Blur Studio. Blur Studio produces animation for feature films, episodic television and television commercials. It has produced several fully-animated ride films including Batman: The Ride, The Mask, Stan Lee's 7th Portal 3D Simulation Experience, Meteor Attack and Star Trek World Tour. It has also produced cinematics for some of the world's most popular game titles, among them Return to Castle Wolfenstein and the newly released Spider Man: The Movie.