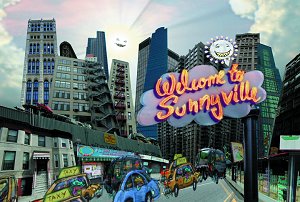 "Sunny Feet" is a dynamic combination of photo collage and animation telling the story of an unusually happy commuter's journey to work in the bustling metropolis of Sunnyville. As his occupation is revealed, all of Sunnyville is indelibly altered. Designed directed and animated by Pete List. Music by Fuzz Townshend.

Pete List is a versatile designer/director/animator who easily transitions between different animated media to create distinct looking animation appropriate to the context. Pete has created animation for television and film for such clients as MTV, Nickelodeon, Nickelodeon Movies, UPN, Cartoon Network, PBS's Reading Rainbow, and CBS. Since Pete is also an accomplished musician, music video is a natural format for his talents. He has directed and animated videos for Marilyn Manson and Fuzz Townshend and animated videos for Jeru the Damaja and Razorkat (Dweezil and Ahmet Zappa). Pete lives in Brooklyn, NY.