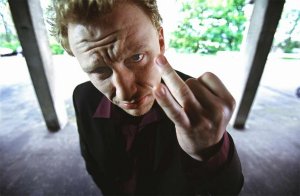 Tom wakes up, and realises he has had a one-night-stand. As his drink-addled mind feeds him dangerous memories, his increasing anxiety fuels a paranoid imagination, until he learns a valuable lesson. This is a comedy of comeuppance, a fast paced roller-coaster ride through the mind of a man increasingly aware of the possible implications of his infidelity, as he makes his way home the morning after the night before. First, he imagines admitting everything to his wife; it doesn't play out well. So, he tries running through an excuse: fine. Then he discovers his wedding ring is missing and remembers why; the woman he slept with swallowed it. And there are far worse revelations yet to occur to him.

James has worked as a freelance director in TV since 1994. He's made a documentary series, children's comedy drama, title sequences, commercials, corporate dramas, the odd pop video and short film. He has been writing since 1999.