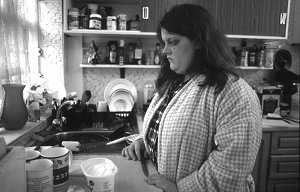 Debbie is shy, overweight, and has never had a boyfriend. Best friend and roommate Ange however, can't seem to get enough. But when you're blonde, thin, and pretty (available) it isn't that difficult. Debbie finds her love in jars of chocolate spread, which she guards jealously from Ange. One afternoon Dave comes round to do a project with Debbie. He is also shy and has the hots for her. Will they get it together or will Ange get in the way? And what will be the price Ange pays for taking just one too many of Debbie' s prized possessions? Starring Rebecca Gallacher and Vanessa Hehir, Cupboard Love is a dark tale of female friendship, chocolate spread, and sharp knives. Cut close to the bone, we are on the edge of our seats until the final twist in the tale.

Emma Farrell is an award-winning director from England who also writes and produces. Since setting up her Production Company, Six Foot High Films, five years ago, she has produced three feature films, devised and ran an international script-writing competition, and directed many commercials and short films. She has three features in development, including the real time thriller 'The Final Drop'.