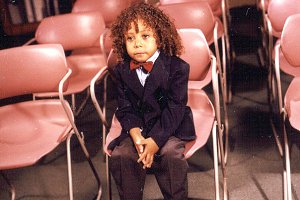 The Paper Mache Chase offers a rare look behind the doors of The Bellinger Pre-School, a veritable establishment, where PDATS (Playdate Aptitude Tests) and endowments guide the way to admission of the most gifted three to four year olds New York City has to offer. By way of two anxious couples and their equally eager offspring, we're given an inside glimpse into the contraversial world of elite nursery education, and come to question, in fact, who's seeking the acceptance.

Dave Jordan has written and produced commercials for CNN, CNBC and CNNfn. His first short, which he also wrote and directed, "Pussycat Love," is a black comedy about a New York City housecat's unrequited love for its male owner. "The Paper Mache Chase" marks Dave's foray into the world of untouchable subjects (animals and children, respectively) in comedic short film. The proud Papa of newborn baby Bec, Dave hasn't begun to stress about getting her into nursery school, and he intends on keeping it that way.