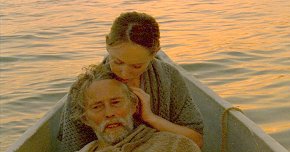 TOO CLOSE TO THE BONE

On a hot July afternoon, a girl wanders away from a house, towards a deserted pool of water. Her body is recovered the next day. Thirty years later, as Allon White lay dying of leukemia, he draws upon memories of his sister's death and the landscape of his childhood. These fractured recollections are the inspiration for Too Close To The Bone.

Sebastian Godwin is undertaking the Fiction Direction course at the Lodz Film School, Poland, from October this year. He has worked on a number of professional dramas including Earth (1997). Sebastian graduated in 2001 from Cambridge University. He is currently writing a short film script with Jay Basu, whose first novel has recently been published by Jonathan Cape. Sebastian has directed all of Talamasca Productions' films to date including Too Close to the Bone.