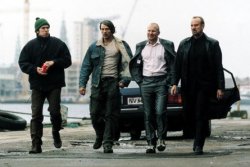 Torkild may be forty, but he can't seem to get past his childhood high jinks. He's still indebted to a group of vicious, big-time crooks. His own little gang of faithful buddies has a depressing tendency to fail at the jobs he plans for them. These four no-goods with their traumatic childhood memories have never really grown up, but their lives change when at last they find a hang-out - an old forest inn - where they are able to lead a utopian kind of life. A natural life, the good life for good people, but of course paid for by crime money.

Anders is an accomplished screenplay writer for many Danish feature films such as Mifune. He has received recognition for his short films with awards for three consecutive years with nominations for the Academy Awards.. All of his shorts have been co written and, or directed by Anders Thomas Jensen himself. Flickering Lights is Jensen's feature film directorial debut.