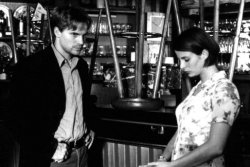 THE LONELINESS OF THE CROCODILES

Günther, an intellectual son of a butcher from East Westphalia, is considered an eccentric in his village. He antagonizes his parents by taking the farmer's pigs for a walk, in order to show them something other than the butcher's bench. But is this gentle, shy crankiness enough to commit suicide? To Elias, a young journalist from Hamburg, the death of a distant cousin seems far too neat an end to a weird loner. So he travels to the village to find out more. When he attracts the attention of Heike, the prettiest woman of the village, Elias has all the local men against him and finds himself in the role of the suspicious outsider. Surprisingly he meets Mary, a zestful African American who reveals to him her love affair with Günther. They both had a dream whose fulfillment would have meant a different life for the boy. Suddenly their contact breaks off; Elias is now certain that he is about to solve a mysterious murder case.

Jobst Oetzmann studied at the Academy for Film and Television in Munich and is a director and screen writer.