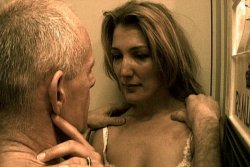 "No Man's Land" is an original film about love, described on a series of levels in today's Denmark where the changing morals and generations from several periods of time live side by side. The characters in this "No Man¹s Land" have only one thing in common: Their hearts can't stop thinking. Therefore none of the people portrayed can stand themselves when they are unable to forgive the person who has done them wrong. The film offers no simple recipe or absolute answers to what each one has to go through in order to reach this forgiveness - just like life doesn't. No Man's Land takes place in a café owned by Harley and Agatha -- brother and sister. Harley is in the center of all the action and during one day and one night he is forced to revise his view of the women in his life - in particular Agatha. The core of the problem is that Harley has to not only recognize, but also accept that women, too, have sexual desires. In his denial of this fact he carries coresponsibility for the emotional crippling his sister willingly is experiencing. A revelation of a family secret helps her to rebel against him and to escape her mental corset. All this happens while the café is open, guests come and go, all with their own problems, dreams, traumas, conflicts and longings that they are only too happy to share with Harley. Surprisingly this dire story is told in "sotto voce" with lots of humour and a daring dialogue. These are real people talking to each other in real words. And even though the main character is a man, this "No Man's Land" is a land that men can have a sniff at, but only women can live in. "No Man's Land" bears witness to the very direct nature of female lust.

Born in Jutland in 1957, actress, drama teacher and director, Nina Rosenmeier calls herself "nothing but a soulwhisperer". Educated in Method Acting, FM Alexander technique and specialising in anatomical psychology in relation to performance, NR has worked and taught at the Copenhagen Royal Opera School, The Royal Music Academy, Festival of Fools, Cafe Teatret, Dramaskolen, Aalborg Teater and Østre Gasværk. As a film actress NR works in Denmark and abroad. NR is a member of the Danish Actors Association and Danish Film Directors Association.