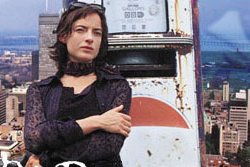 Her name is Pandora. She harbours a secret she wanted no part of. She intends to share it with someone. Fate determines that, one day, Pandora shall meet Vincent. She thought she had everything worked out. Vincent, for his part, didn't see it coming. The shock is devastating. Vincent, whose life up to then had been marked by success after success, falls head over heels. His relationship with Ariane shatters. His friends warn him. He reacts violently, lies low, and succumbs to a series of relentless nightmares. But the same fate that provokes this cataclysm fuels a burning passion. Together, Vincent and Pandora discover a new life, full of challenges, yet truer and more demanding. Who could have predicted that their encounter would produce such a unique and beautiful love story?

CHARLES BINAMÉ has started his career in the seventies. The documentaries he directed at the time, sketches of Pierre Vallières, Denis Vanier and others, already bore his stamp. In 1993, he directed the series Blanche, a sequel to Les filles de Caleb, and it won him both the Gémeaux award for best directing and the FIPA d'or in Cannes. Then came out one after the other the movies C'était le 12 du 12 et Chili avait les blues (1994) and Eldorado (1995). In 1996, he directed the series Marguerite Volant, followed by the movies Le coeur au poing (1997) and La beauté de Pandore (2000). In 2001, he was back to documentary filmmaking with Gauvreau ou l'obligation de la liberté. Un homme et son péché, his recent movie, beat the Canadian box-office record, with close to $10 million in revenue, which owed him the Billet d'or at the Jutra awards evening and the Bobine d'Or at the Genie Awards. In 2004, he made his first works in English: the miniseries H20 (CBC) and the "movie of the week" Hunt for Fustice (CTV) and shot a documentary on the moviemaker Gilles Carle. In 2005, he shot the movie Maurice Richard. CHARLES BINAMÉ's films have been presented in prestigious international festivals and won many prizes.