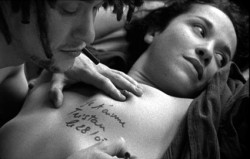 A young couple is making love in a bedroom. She's in love with him. She won't stop telling him. He's not sure to be in love with her. He don't know how to tell her. So she presents him an ultimatum : he can't leave this room before telling her the three magical words she's waiting for.

Christian Sonderegger was born in Strasburg, France in 1967. He worked as a screenplaywriter for the feature film: "Alissa" directed by Didier Goldschmidt, France, 1998. He directed 3 short films. Now he's working on the preproduction of his first feature: "Le Naufragé".