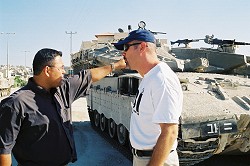 In the midst of the Israeli-Palestinian conflict, two former friends and present-day enemies, embark on an emotional journey into Intifahda-land, in search of the origins of the bloodshed. Benny Hernes an Israeli police officer and Palestinian journalist Adnan Joulani spend a week traveling together through places which have become symbols of the dispute. Each has selected locations in attempt to convince the other of his own truth: Jenin refugee camp, terror ridden Jerusalem, the disputed Temple Mount, the family of a suicide bomber and more. Adnan, has experienced the death of his beloved cousin shot dead by an Israeli settler. Another cousin went on a shooting rampage in the heart of Tel Aviv. Benny, himself a settler, trains special Israeli forces to combat Palestinian militants. They first met over four years ago on a joint peace mission to Japan. While embracing the "Tokyo Spirit" of understanding, the two vowed to take home a message of peace. Soon after their return, the second Intifahda erupted. "Behind Enemy Lines" is an emotional and dramatic quest through the milestones of the conflict. Despite the huge gap in their perspectives, Adnan and Benny try to find ways to communicate. Their success is an only option to the future of the region. "Behind Enemy Lines" is a sequel to "Sleeping with the Enemy", a film which followed their original journey to Japan.