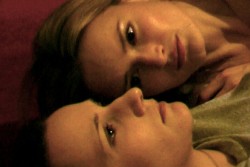 A disturbing portrait of a young woman pushing against the boundaries of love and lust. Billy's passionate relationship with her friend, Maria, ignites her fathers' forbidden desire.

Tatiana Strauss completed her first feature film, SPACE INVADER, which she wrote, directed and starred in, early last year. Her next feature, W , is in development, while she is concurrently working on a new theatrical play, ALSO, and her first novel, CRUSH. Tatiana spent a number of years working with her own theatre companies, Flipside and Living Theatre, writing, directing and acting. During that time she co-wrote a play, BLOODSUCKERS, about sibling incest, which played in London.

The director will be available for Q&A after the screening. Cinematographer Barry Kamen will also be in attendance.