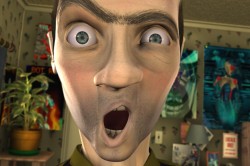 Vito is an adult man who still plays with toys and in particular with a robot toy called Bot Roy. Hiding all this to his mom he gets on an online auction to buy the special ìgoldî edition of Bot Roy. It will not be easy, and Vito has a very short temper.

Carlo Sansonetti was born in Fasano, Italy. He moved to Los Angeles, California, on September 1999. After attending Dhima, he graduated at The Art Institute of California - Los Angeles with a Bachelor of Science in Computer Animation. He has been involved in various projects like Grandma (2002), directed by Frederic Soumagnas, as animation supervisor. He worked as an Animator for the motion picture Scary Movie 3 (2003). The short animated film The Auction is his first production as director