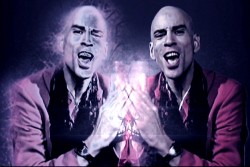 Challenging complacency in the media-arts, Inseparable Bonds offers a fresh sliced alternative to "reality" television, presenting instead "surreality" television. Our host with the most "Sir Real" interviews his latest special guest, a couple who have merged mind, body, emotions, soul and gender to become the one abominable character - Gareena. ... guaranteed to unclog the arteries of lacklustre television.

Lars has extensive experience in directing, animating and supervising innovative works utilizing a vast range of media - film, photography, multi-media installations to animation and special effects. He has earned several distinctions and awards for his work and has been invited to participate in presentations, speeches and panels around the world, from UK to Japan and Germany. Lars's directorial and animation work has been featured in several magazines and featured on television programmes such as 'Mosquito', 'Canal +' and 'Tech-tv's; Dash's House'. Lars's creative pursuits have not been limited to the film industry. He has earned distinctions in a variety of artistic arenas; from lead-vocalist in a punk-rock band, involvement in a performance art group to multi-media installations, most notably 'Annlee, You Proposes', a collaboration by Lars (as director) and renowned artist Liam Gillick, included in a nomination for the Turner Prize 2002.