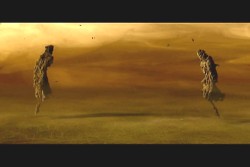 Simultaneously inspired by the paintings of Beksinski and the music of Moby, I set out to blend image and sound as seamlessly as possible. Another of my goals was to create a series of images that would be unforgettable. One of the techniques I developed in an attempt to accomplish this was to reverse every way that the human mind processes sensory input. We shot the action in reverse, then digitally reversed the footage so that the characters would appear to move bizarrely forward. We also shot the characters upside down then flipped the images right side up. We shot at double speed then digitally ramped back to normal. Most effectively, we shot the entire piece underwater, then composited the character elements into a dry environment. All of these processes result in giving the piece a very surreal, dream-like quality that confounds the viewer's sensibilities as to what they're actually seeing. This film has a deeply personal meaning to me, but I feel it would be meaningless to explain it. The real question is, "What does it mean to the viewer?"

Steve Johnson founded Edge FX, Inc. in 1986, bringing it to the forefront of the prosthetic and animatronic effects industry. Johnson's latest effects can be seen in "THE CAT IN THE HAT," "SCOOBY TOO - MONSTERS UNLEASHED" and the upcoming blockbuster sequel, "SPIDERMAN 2."