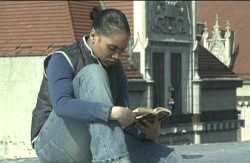 When Cynthia's father hands her "The Diary of Anne Frank" before dying, she never imagined how it would open her soul. Trapped within her own prison, Cynthia finds the courage to stand up and fight for what's hers. In the style of 8 Mile and Girlfight comes a film of intensity and emotion perfectly cast with unforgettable characters.

Anne B Real marks Lisa France's directorial debut in a full length feature which she also produced and co-wrote. Lisa has made a number of short films and her first film Love in Tow won best comedy as London's Filmstock International Film Festival. Lisa is currently developing several new projects, many of which she is scripting.

Screenwriter Antonio Macia will be available for Q&A after the screening.