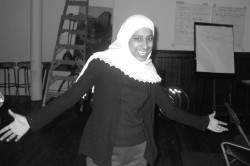 Three girls share their lives as Muslims growing up in New York City. One teen lives an ÒAmericanizedÓ life, while another tries to keep true to the daily rituals of her faith. The three speak about how their faith and religious practices differ from each other.

Ramalah Yusufzai was born and raised in New York, but she is a proud Pakistani-American Muslim. She goes to the Mosque at least four times a month and prays five times a day. She wears a Hijab, the traditional Muslim headscarf, even when she plays basketball. She cherishes her religion, culture, family and friends, and she feels that Muslims are not heard enough. She enjoys being a DCTV Pro-TV youth video producer because she wants her voice to be heard.